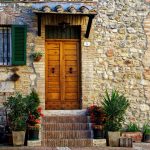 Have you ever heard someone say: “When God closes a door, He opens a window” or some such?  I have.  And I want to let you know, it ain’t necessarily so.  Sometimes God closes every door and window leaving you no escape from your predicament.

Some years ago, i went through various situations where I was just “stuck.”  I couldn’t go forward, I couldn’t go backwards.  I was burned out and capped out where I was.  And I was quite devastated when I was denied a position I really wanted by the very person who had shortly before commended me and the work I had done for that department when they were without staff.  After the position was posted and interviews began, an external person was chosen–someone whom I knew did not have as much experience or as varied experience with the multi-functions of the position.  It was very disheartening and it didn’t help to know that the person who had the final say, based on authority, was the person who had been commending me before.

So, the door was closed and there was no window—nothing from nowhere.  I stayed where I was and not very long afterward took on more responsibility and gained more skills in the position I had which led to a promotion. Shortly after getting that promotion, the department I had so longed to move into before was completely eliminated, and all of those people ended up without a job one way or the other (if you get my drift).

In hindsight I saw that God was protecting me and allowing me the opportunity to grow where I was already planted.  It was God working all things together for my good even though when I was going through it, I couldn’t see it.  These kind of things can be hard trials and storms to ride out and in the midst of it we probably won’t understand what is going on and can feel dejected and depressed.  But God knows what’s going to happen in every situation.  In this instance He allowed me to see the outcome of how He protected me.  If I had gotten that job, I would have just as surely as the others been out of a job a short time later, which would have been even more devastating to me.

They say hindsight is 20/20.  I like to say, you don’t always see God coming, but you sure know when He’s been there.  So having gone through that experience–on more than one occasion I might add–I can look on these types of things from a different view even if I don’t get an explanation or the 20/20.

If you’re going through these kinds of things in your life, know and trust that God is good, gracious and merciful and He works all things together for good to those who love Him and are called according to His purpose (Rom. 8:28).  What He shuts no one can open, and what He opens, no one can shut (Rev. 3:7).

I’m grateful to God for a lot of closed doors, and appreciative for the ones He opens.