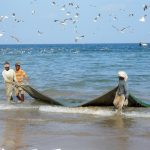 As I was reading through the Gospel of John at the end of 2017 and the start of this year, a nagging question came up again.  Why did Jesus appear different after His resurrection?  Why were there times when His disciples did not recognize Him?  After all, they had spent a great amount of time walking with Him and being with Him.  This time, however, something of an answer came to mind.  Now before I tell you what came to me, I will put in the disclaimer that I am no theologian, nor have I ever even been to a seminary; and there may be other reasons.  I don’t think that anyone can be very dogmatic about it.

What came to me was this.  Jesus was going away—ascending back into Heaven from whence He came.  The apostles and His disciples would no longer be able to see Him.  They would have to learn to recognize Him by His voice—by what He said and did.  And, indeed, it was through what He said and did that they came to realize it was the Lord.  This not only happened at the breakfast-by-the-Sea-of-Galilee cookout after Jesus instructed them how they could catch fish (John 21: 1-14), but also to two disciples on the road to Emmaus (Luke 24:13-35) when He explained to them all the things concerning the Messiah, Himself, that needed to happen.

They were stirred in their spirits and were able to recognize Him spiritually, not visually.  Maybe that was the example Jesus wanted to set for believers who would never physically, tangibly, see Him, touch Him or walk with Him in His days upon the earth.  Perhaps it was so that we, down through the centuries and ages of time, and those who would live in the very end times would learn to recognize Him by His words and deeds.  Maybe that’s why He said if anyone comes saying: “Look, here is the Christ! or Look, He is there! do not believe it” (Mark 13:21).  For He knew that false christs would arise doing signs and wonders and people would be drawn away and deceived by the things they see.

I tend to feel that God is often doing and saying more than just one thing sometimes, even though He may be addressing one specific thing at the time.  Perhaps Jesus appeared different (unrecognizable by sight), also because He may have been teaching a lesson, that we must all learn to walk by faith and not by sight.