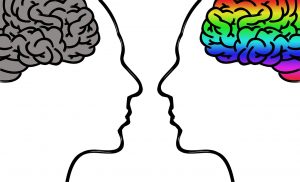 Some years ago, I saw the movie A Beautiful Mind starring Russell Crow as Mathematician John Nash.  I learned two things from that movie.  The first I may perhaps write about later, the second I will write about now.

The second thing I learned had to do with Nash’s response to his life and his delusions after being diagnosed with schizophrenia.  In the dining hall scene near the end of the movie, Nash speaks to a man who tells him he is being considered for the Nobel Prize. Nash says: “I still see things that aren’t here.  I just choose not to acknowledge it; like a diet of the mind.  I choose not to indulge certain appetites…”  Nash was choosing to forego certain intellectual interests and pursuits because he realized they could trigger his delusions.

The culture of the world creates, perpetuates and promotes that which is vile, vulgar, immoral and inappropriate on many levels.  One does not have to seek these things out, they are there bombarding and permeating the environment at every turn.  After reflecting on this, I became more aware of the leaven of the world, its negative impact on me, and how a little leaven leavens the whole lump.

Like Nash’s movie character, I thought it would be a good thing for me to cultivate my own beautiful mind.  I wanted to be more discriminating and discerning about what I watched, listened to and read as entertainment.  So, Similar to Nash, I decided to embark on a diet, to preclude as much as possible, from partaking of the world’s leaven that could trigger in me inappropriate thoughts, conversation and conduct unbefitting a child of God.

Instead, I wanted to cultivate a taste for the leaven of heaven.  For the kingdom of heaven is like leaven which a woman took and hid in three measures of meal till it was all leavened (Matthew 13:33).  I want to cultivate my own beautiful mind with the leaven that works through my whole lump (spirit, soul and body) that will cause me to rise in the ways of the kingdom and not in the ways of the world. By doing so, I hope to walk more worthy of the Lord, fully pleasing Him, being fruitful in every good work and increasing in the knowledge of God (Colossians 1:10).

Each person has his own individual bents and temptations, but the upward call remains to us all.